How I Made the Dog My Pet

When I was very little, our family got a dog.

This wasn't our first pet, or even the first one I remember, as we had a cat called Blacky. Like most little children I loved the pets, and loved to take care of them. I'm told, when I was 2 years old, that they let me feed the cat one time. I scooped her food out of the tin can with a big spoon, then being taught not to waste good food, I licked the spoon off! But I digress...

The dog we got was a Cocker Spaniel, named Prince. He was coal black, and he slept next to the coal bin in our basement. I can vaguely recall when we got him, and I do recall that when we moved across the street from the old Jubilee station house that we called the "old brown house" to the big "mansion" rental house across from it, that we had him then, too. I had to sleep in a room in the basement, and being 6 and 7 years younger than my two older brothers (I was about 4 at that time) I had to go to bed a long time before them. The first few nights in that basement were very scary stuff. There were strange sounds, and no one around to call for help. But there was Prince. I could call him, and I'd hear his collar with the tag jangle, so that comforted me.

Being so much younger than my brothers, I was still only about 9 years old when my older brother went to University. He skipped two grades so he was at UBC when he was just 16 years old. At first he lived with us and was picked up by friends, but then, he moved out of the house and in with some of his friends. I don't remember all the details but I know he wasn't there to take care of Prince.

Now, many parents don't like to get pets because at first, the child is all excited about taking care of the critter, but then it becomes old hat, and if the parents aren't disciplined, pretty soon they are the primary caregivers. Even if they are disciplined, the thought of having to constantly harp on a child to care for a pet is not on most parents list of favourite things to do. I was the perfect counter-example to that.

When I realized that Antoon wasn't around to take care of Prince, I got this idea in my head. I figured if I fed, and walked, and played with Prince, eventually I could claim that because I cared for him, he should be mine. So I quickly volunteered to feed him and walk him. Except when I was deathly ill, I always did my duties faithfully.

The funny thing is, I never had to make it a point of declaring him mine or convincing anyone else. By caring for him, he *was* mine, and he knew it and I knew it, and no one could take it from us! Even my family in short order took to referring to Prince as my dog.

When I would walk him, we always left through the big, old basement door. I had a key for it, so I'd lock it behind me, and we'd go for a jaunt. Then, when we got back, I'd let him in, take him off the leash, and then I'd head for the stairs. The stairs to the upstairs part of the house had this really neat curve in it. My friends always got a kick out of my basement because it felt a bit like a castle with a curving stairway, old beams and oak doors, and a big coal furnace. Anyways, I would get on the top curved step, then call Prince. He'd run up and stop two steps above me. Then I'd pat my chest and he'd get up on his hind legs and put his front legs on my chest and I'd pet him, eye-to-eye, and tell him how much I loved him. That was our little ritual that we always did.

I don't seem to have any good pictures of him, but here is a poor one. He's the black lump resting in the right hand side of the picture. I'm the little boy in shorts and I'm standing behind my dad who is about to throw a ball to my sister. 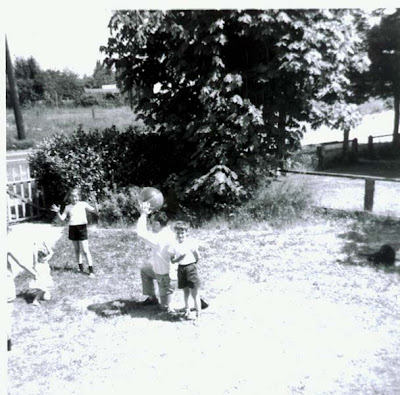 What I learned from this is, if you love something and care for it, it's yours, whether anyone else realizes it or not. And if you care for it long enough, everyone else will know it, too.
Posted by Unknown at 9:22 PM No comments: