What Does Christmas Mean to Me?

My family came from the Netherlands before any of us children, other than my oldest brother, were born, and he was just a baby.  When they came here, they adopted Canadian customs and traditions for holidays, including Christmas.  As a result, we grew up enjoying Christmas trees, presents, Santa Claus, Rudolph, Reindeer and more, much like any other child growing up in Burnaby would have done.

We did a few things that were unique to us:  We never hung up stockings. And we usually opened presents on Christmas eve.  Other than that, I think we were a pretty normal family in terms of Canadian Christmas celebrations.

I don't recall ever thinking Santa was real.  I somehow understood that he was a fun game that parents played with their children, and that the stores were trying to use him to sell their goods. I also don't remember ever sitting on his knee, and I knew who my presents came from.

I do remember really loving the Christmas story. Someone would read all the key verses every year before we opened presents, and I loved our manger set.


I also loved it when my family would sing Christmas Carols.  We were all very musical, and we'd pull out the instruments and have a little mini-concert.

Here is Away in a Manger, recorded by me (recently) on multiple instruments that we would have played when we were young, from my SoundCloud account. Click the play button to hear it:


When I was just seven years old, and was becoming an avid reader, I started reading stories in Reader's Digest books and in newspapers and other places. These stories told of the meaning of Christmas, or illustrated the spirit of Christmas.  I was too little to understand that the latter was God's Holy Spirit working in people's lives, but I do remember it clicked.  Somehow Santa really fell into the background, and it was much more about what God did in sending us Jesus.

I fell in love with the true meaning of Christmas that year, and I realized that St. Nicholas was a bit of a distraction from the real point.

In many European countries, there is a special day for Saint Nicholas, usually on Dec 6th.  This has the effect of clearly separating him from the day to celebrate Christ's first coming.  Unfortunately, in both the UK and in North America, we've combined the two.

I recently talked to my cubs about who St. Nicholas really was, and what Christmas really was about. There are things we know about him and things we can't validate, that are part of the legend and myth surrounding him.

Here are the historical facts we have about Bishop Nicholas of Myra:

Nicholas was born during the third century in the village of Patara. At the time the area was Greek and is now on the southern coast of Turkey. His wealthy parents, who raised him to be a devout Christian, died in an epidemic while Nicholas was still young. Obeying Jesus' words to "sell what you own and give the money to the poor," Nicholas used his whole inheritance to assist the needy, the sick, and the suffering. He dedicated his life to serving God and was made Bishop of Myra while still a young man. Bishop Nicholas became known throughout the land for his generosity to those in need, his love for children, and his concern for sailors and
ships.  In many lands, St. Nicholas day is celebrated on December 6th, the date of his death.

So Nicholas was a devout Christian who followed the example and teaching of Christ. His example is a good one to follow in that respect and he's worthy of note, and maybe even a feast day, if that's your thing!

Some stories that circulate about him include a very consistent one in which he attempted to help a man whose wife had passed away (or was very sick) and several daughters. The result was gold coins in the stockings that the girls had hung to dry in their chimney (chimney's used to be big enough you could stand in the fireplace and you'd use it to cook or dry clothes.)  This drove the tradition of stockings for St. Nicholas day.  It has nothing to do with the Nativity story.

There are other stories about St. Nicholas that are a bit harder to verify. After his death, he is credited with rescuing a 12-year-old boy who was taken as a slave by Arab pirates from Crete, on the feast day of St. Nicholas. A year later, in answer to his mother's prayers, St. Nicholas miraculously rescued the boy and whisked him back to his home and his parents.  He's also credited with praying to God who miraculously raised 3 murdered children back to life in answer to his prayers (while he was still alive.)  While there are numerous sources of these stories that corroborate fairly well, there is no evidence supporting them.

He was an interesting character, as you can see, with lots of interesting facts and unverifiable legends, but even the historical facts clearly identify him as a person of faith and personal character, with a heart of giving and helping others.  While this is a good fit for the Christmas season, I still think it's a bit of a distraction.

The real point of Christmas, and the true gift of Christmas, is summarized in John 3:16.  God gave us his son, Jesus, born in a manger, announced to lowly shepherds, worshiped by foreign magicians and soothsayers. His son was not sent to drive our foreigners (Romans) from Israel, nor to be recognized by a sinful world as a key world figure, but to give his life to redeem us from sin. To free us from the tyranny of sin, made the tyranny of the Romans, or anyone or anything else, for that matter, immaterial! One day He will free us from all the rest, too, but for now, he has left us in this broken world to proclaim the message of the Gospel to broken people. The same message that the Angel of the Lord announced and a choir of angels sang many years ago, on the first Christmas day:

"For unto you is born, this day, in the City of David, a Saviour, who is Christ, The Lord!"

That's the true meaning of Christmas!

Experience the joy and magic of the first Christmas story as experienced by two boys.  David is a young Jewish boy, living in Persia, learning to be a scribe, when the star first appears.  Adopted by one of the wise men when his father passed away, David goes as an interpreter for the wise men.  Thomas, a young shepherd boy, is there when the angel announces the Christ child. Almost two years later, he meets David and leads him and the wise men to the house of Joseph, Mary and Jesus in Bethlehem.  Along the way, David learns lessons about faith, and about accepting differences in all people who would worship the Christ child!

An excerpt from the story can be read on my author blog site:
https://sototallyfiction.blogspot.ca/2017/11/the-following-is-excerpt-from-my-book.html 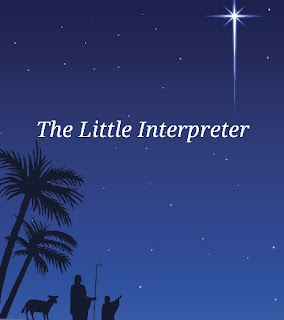 The Kindle eBook or paperback can be bought at these English-language Amazon sites:
US Kindle and paperback
https://www.amazon.com/Little-Interpreter-Robert-Houben-ebook/dp/B076YRB7K3/ref=la_B076Z431Y2_1_1?s=books&ie=UTF8&qid=1509854590&sr=1-1
Canadian Kindle
https://www.amazon.ca/Little-Interpreter-Robert-Houben-ebook/dp/B076YRB7K3/ref=sr_1_1?ie=UTF8&qid=1509854858&sr=8-1&keywords=the+little+interpreter
Australian Kindle
https://www.amazon.com.au/Little-Interpreter-Robert-Houben-ebook/dp/B076YRB7K3/ref=sr_1_1?ie=UTF8&qid=1509854902&sr=8-1&keywords=the+little+interpreter
UK Kindle and paperback

Posted by Unknown at 2:09 PM No comments: