My Affinity for Train Stations

I have always loved trains. My earliest recollections are of trains.

When I was about to be born, my mother went into Vancouver General Hospital, and while she was there, the family apparently moved from a house in Vancouver, to a new one in Burnaby. The house we moved to was actually the former BC Electric Railway Jubilee station on the Central Park Interurban line. The link below shows one of the old BC Electric trams at the Jubilee station. I couldn't find an old picture that actually showed the station house itself. 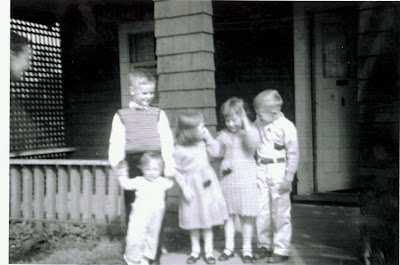 Here is a picture of me (the littlest one) in front of the old station house. 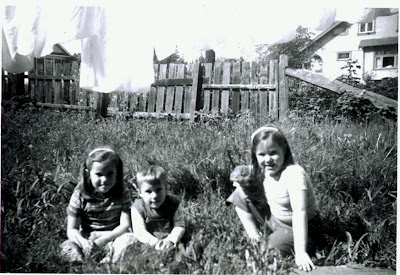 And another one of me with my two sisters, in the yard.

Some of my earliest memories are of the trains coming through. They never moved very fast, when coming through this area, but I still remember the feel of them, so big, impressive and powerful. Rumbling their deep, deisel-electric rumble. I've always found trains so comforting, like a lullabye.

When I was just four years old, our family moved across the street into a house that had a perfect view of the old station house. I think we moved because the building was condemned. I have recollections of buckets catching the rain leaking through the roof when I was still living there.

I still remember watching as my dad and his big friends carried the furniture and other belongings across the street for the move. Shortly after the move the station was torn down. We stayed at the house across the street until we moved to Mission, when I was twelve.

From that house I continued to see and hear the trains coming past. I'd kneel on the couch in the front room and watch them come by. I always loved to watch the trains. I have recollections of walking on the rails, balanced on them. I recall how the hot metal felt on bare feet, and how the hot tyes, with their creosote felt, too. My friends and I would ride our bikes along the right-of-way next to the tracks as a shortcut. You'd think that would be the end of my train experiences, but no, they continued beyond that.

I remember when I was 18, moving from Maple Ridge to some cabins in Albion near the Albion Fort Langley ferry. These were called the Albion Cabins, and were managed by a gentleman named Carlos Hovi (I may have the spelling wrong, but that's roughly his name.) I worked at a spindle factory at the far end of river road, just outside of Haney. To get there, I walked down a trail through a ravine to the tracks and then along the tracks till they came to the east end of river road. Then I'd walk all the way down river road past the ferry terminal. Every morning at least one freight train would come by, and I'd stand at the side of the tracks, just a few feet away, as a fully loaded freight train would race past at about 60MPH. This was a good way to wake yourself up first thing!

Some time later I was visiting an older friend in Mission, named Chris Desjardins. He had been a scoutmaster in Mission, when I had been a junior leader (read: annoying teenager). I was visiting him with another friend of mine, when he got a call from his brother Clive. Clive had taken out a lease on the Matsqui Canadian National Railway Train Station with a friend of his sharing the rent. He had an old Dodge Fargo truck that he wanted to repair. He was trying to hand push it and jockey it into the workshop attached to the train station, but he pushed it too far back and the back wheels went off the platform. The back of the truck was across the tracks and he didn't know when the next train was coming!

We hopped in our cars and raced across the Mission bridge to the train station. We both blew the speed limit right out, but I took it a little easier, so Chris got there first. When I got there with my friend, they had 3 people on the tracks behind the truck. They had jacked the truck up as far as they could go, but it was still about 4 inches shy of getting back on the platform.

Now a 1950's Dodge Fargo was not a modern, fiberglass, crumples-if-you-hit-something affair. Modern cars and trucks are designed to crumple in an accident, so they absorb the shock instead of your body. I think the idea behind the Fargo was, if you hit something, you went through it without noticing it. The thing was solid steel and weighed a ton!

We joined in, and for a good 5 minutes we struggled mightily, getting about an inch shy of putting the truck onto the platform, but it just wouldn't do the last bit. Then, in the distance, we heard the train whistle, as a freight came around the north end of the Sumas mountain range. We knew we had about 2 minutes. Suddenly the adrenaline kicked in, and with a mighty push, the truck went up on the platform!

We pushed it into the workshop and were just about to close the doors when the freight arrived, roaring past at 60 MPH!

We had a bit of a chat, and I found out that they were looking for another person to split the rent. The lease was for $150.00/month. CN provided toilet paper, cleaning supplies, heat, electricity and light bulbs. Clive was responsible for keeping the waiting room clean (they had about 1 passenger stop per week), making sure all the lights on the platform were going, and keeping the outhouses clean with toilet paper. I decided to take Clive up on it. With 3 of us renting, the rent was $50.00/month each, heat and light included! That was a pretty hard deal to beat, so I moved in. We divided up the duties, and I wound up cleaning the waiting room out once a week. I would have done it more if it needed it, but almost no one ever came through there. 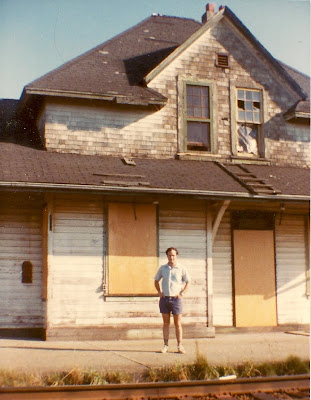 Here is a picture of the station as it looked just before it was torn down. Loretta took this picture of me in front of it. 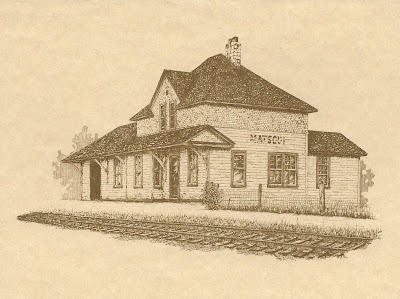 Here is an artist's sketch of it from happier times. I bought this card from Dianna Ponting many years ago.


Now it is still a stop, but it's just a sign indicating a stop.

They were working on a room for me, but it wasn't ready yet, so I spent the first week or so in the ticket office in the front of the station. As you can see from the picture above, the ticket office sticks out onto the platform, and has tall slit windows that face up and down the tracks. The other tenant, Dan, was in the already finished room that faced the tracks. He would wake up with every train that went by, while I typically slept through them, only hearing the ones that went by when I was awake, or half-awake.

When a freight went by a full speed, the house shook so hard, that you couldn't see your reflection in a mirror. All you could see was a blur. Conversations were briefly impossible at anything less than a yell.

In September, when the weather cooled off, we discovered one of the downsides to that station house. It had no insulation, and its windows were not well sealed. The heater ran non-stop. Now CN paid for heat so the cost wasn't a problem, but the house temperature dropped to 65 fahrenheit (18 celcius), and it wasn't even that cold outside yet. For reasons of work, I moved back to Albion again, sad to leave the train station, but realizing that from a temperature point-of-view it probably didn't make sense to stay there and freeze as winter came on.

For our 25th wedding anniversary (and Matthew's grad year), we took at trip for 3 1/2 weeks to Europe and the UK. We travelled the whole time on Eurail and Britrail, and really enjoyed the experience.

Yes, I've always loved trains, and I still do!

(Special thanks to http://www.railroadforums.com and http://www.railpictures.net for their excellent libraries of photos.)
Also to Dianna Ponting who did such a nice sketch of the station when it still looked nice.
Posted by Unknown at 4:46 PM 1 comment:

This morning on News 1130, as part of a Canada Day segment, they played a song that I had not heard in a looooong time! It was that song from the 1967 Centenial celebration.

Wow did it bring back some memories! I dug around on YouTube and found a great clip of the song, with lots of pictures. I remember that maple leaf made of triangles all over the place (even have it on my Scouting campfire blanket!)


I was 7 turning 8 when I first heard that song, and I remember that it felt like the most glorious, happy, optimistic song. That was a very special year for me (I'll blog about that, some time.) I loved the feeling of celebration that the song presented, and the fact that the main singers were children like me!

Here's a picture of me about that time (I'm on my dad's lap on the left): 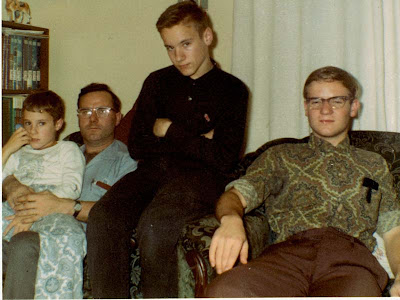 It felt like a wonderful, optimistic world, despite that so-called experts were telling us that we'd all be wearing gas masks from pollution and starving from overpopulation in less than 20 years. Funny how children will latch onto the positive and the optimistic, and strive to make that vision a reality. Also funny how grumpy old scientists with an urgent desire to get funding for their pet project will blow a problem out of proportion...

As someone who works with children as a volunteer, I can say that the ones I know seem for the most part to share that same bright, happy, optimistic outlook. I have no doubt that they will find ways to fix the problems that will confront them in the years ahead, even as my generation managed to avoid the gas masks and global starvation.