I took yesterday off to take in some of the free Olympic venues, and while explaining what I did and what my recommendations were, I was asked to put it in an email, so I thought I'd blog it instead, and email the link.

Someone gave us a tip, and the first thing we did was arrive 1/2 hour before the Mint opened. The Mint Pavilion is at 500 Granville Street (at Pender). You want to line up at least a half hour before, as it still took us 2 hours to see the medals. You can just walk in, but you won't see the medals. If you line up, they give you a hand-stamp and you get in a line. While you are in there, have someone hold you place in line and send someone else with a bunch of quarters. There are a couple of stations where you can line up to get a coin holder and exchange regular quarters for Olympic ones.

You will get a white glove which you must use to hold the coins. You cannot hold them in any way that looks like you are wearing them or awarded them, but you can get your picture taken with them. 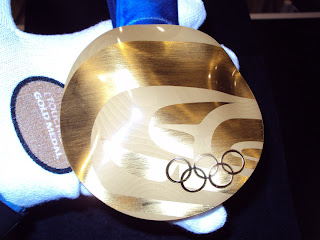 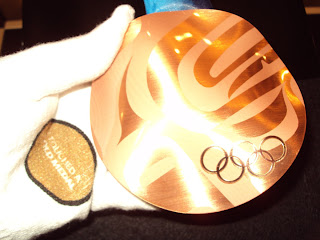 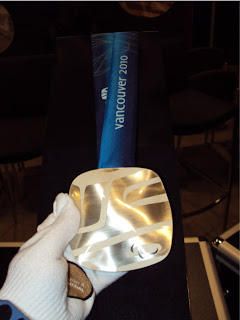 When you are done, you can go into another section, hold a gold ingot and see a 1 million dollar gold coin. There's also an interactive kid's section, but it was not open when we were there.

This is well worth the visit.

Then we went around the corner on Pender and walked to Northern Canada House. There was no line and it would have been worth a line! They had interesting crafts, a place to build your own innukshuk (and lots of explanations about what the different types are and what they meant), draws for prizes, you can make an interactive video of yourself overlaid on Northern Canadian landscapes, they even had games that involved drums that they demonstrated, then brought the kids up to play them (and the drums.) We had heard this was the best venue and I would agree from what I saw.

Then we had lunch and crossed over to see the Russian tall ship. If you've never been on one, then maybe the $18.00/person admission would be worth it. Having been on the Pacific Swift when Matthew was in Grade 7, I skipped it.

Next, we went to the Post Office on Georgia Street. They have Olympic stamps. We recommend that you bring some sheets of paper, or a notebook for your kids to stamp these on. There is one for each event, and one for the mascots, so there are a ton of them. They did a commemorative day-of-issue stamp for Bolideau's first-ever gold medal on Canadian soil. They also have an athlete signing autographs every day, I beleive at 2:30 pm.

Next we went to the Live Entertainment site across from Canada Hockey Place (GM Place for locals.) The one disappointment here was that there were no seats for us, and we both needed to sit for a bit. The Canadian Pavilion, which was inside here had a line where you could pose with a torch with a glacier as the background and they'd take your picture with your camera. They also had a game where you tried to score a virtual goal in hockey. You could also get your picture taken with a fake bobsled. And they have interactive table-top multi-touch screens with games for kids and adults alike.

This venue also had the Saskatchewan house which was easy to get into and quite well done. While you're there, take a quick wander through it, just because you can.

Then, because there was no place to sit and it was getting colder, we went home to watch the Canada vs. Norway hockey game.

Later, we went back downtown, first to see the cauldron, then we walked through Robson Square. The buzz there after a hockey win is something you have to feel. Next we went to Granville Island. One of the best venues there is Atlantic Canada House. Be prepared for a long line, but they have seafood that you can sample and amazing entertainment.

So that's what we did. There is more, but we ran out of time. That was one long, exciting day at the Vancouver 2010 Olympics!
Posted by Unknown at 9:32 AM