All my life I've loved to tell stories.

Some of my earliest memories were of playing with my little sister, Margaret, with some puppets that an older sister Sylvia made for us.  Mine was a cloth and felt mouse with a super-hero costume and cape. I called him Mouseface.  My little sister's was a bisque cat head with a very light cloth body, which she named Pussycat.  I loved to make up silly stories and make her laugh!

When I was older, I had a scoutmaster who invited me to bring my guitar along from time to time and I would lead my fellow scouts in a collection of campfire songs and songs we'd hear on the radio. Kumbaya would be followed by Sloop John B (Beach Boys version).  We'd tell stories at campfire time, and do skits and sing songs.  I loved the stories, skits, music and performing.

I continued leading campfires and telling stories at cub and scout camps as I progressed through being a teenage leader-in-training through to a full adult leader.  Most of these stories were canned stories, and I continue to tell stories like "The vinder-viper" and "The purple ape".  I've embellished these so that they are great favourites. My cubs continue ask for them after hearing them several times over!

In both elementary and high school, I remember thinking up whole, elaborate stories in my head, when I was supposed to be focusing on school-work.  Somehow, this didn't prevent me from passing school, but it was clearly more fun than learning at the glacial pace that school expected of me.

Then I had my own son, and various nieces and nephews, and I found that I loved to make up stories to tell to them. I'd make up running stories while driving my son and nephews to school. Sometimes, I'd go around the block before dropping them off so I could get the story to a good point. Then, the next time I took them somewhere, they'd beg me to continue it.

I've loved telling stories, especially to children, I think because of a combination of things.  First, I love the creative aspect behind it. Second, I love the performance aspect of getting up in front of a bunch of children and telling the story from memory.  And lastly, I love the joy and delight I see on the faces of the children when I'm telling them the stories.

So, a couple years ago, I started taking some of the stories that were rolling around in my head, and writing them down.  When I had a couple at a pretty good place, I started to do research.  My wife is an aspiring author, who writes for the local Collingwood newspaper, and she was a member (and webmaster for a time) for the local Society of Children's Book Writers and Illustrators (SCBWI) western chapter.  I attended a few events and sessions with her, and I recommend this as a good way to get critique and input on your book.  Unfortunately, my schedule made it very hard for me to make any of the meetings for the last year.


How should I publish my book?

As I researched what it would take to publish a book, it turned out that there were several options:

You could hunt down an agent and start hitting up publishers. If one of them thought your book was any good, they would engage you and would try to change the book to suit their picture of success.  This was a problem for me.  I grew up in an age when a handful of rich people in offices somewhere took the top 40 songs that *they thought* the general public would like, fed it to us in every radio station and told us that this was what we liked.  We didnt... There were about a dozen songs I liked, and another dozen I could tolerate, but the rest basically sucked, and I put up with them waiting for one of the good ones. Meanwhile, there were a bunch of songs I had heard before and really liked, that were no longer in that top 40, so you basically didn't get them unless they ran a request line.

I couldn't bear the thought of that same mentality trying to coerce my book into their idea of "good" (which would probably suck for me) so I decided that this was a definite no-go for me.  I also figured that I was too impatient to wait for years while someone messed around with my story.  Traditional publishing typically takes a couple of years to get a book to market.  I don't move that slow, why should they!?  I guess I'm too impatient and independent for that.

Traditional publishing generally returned a fair bit more money than self-publishing, but only if some publisher liked your story, and the average still wasn't that high, and you had to do a lot of marketing yourself.  It didn't sound too promising.   Ultimately, I want my story to be read. I decided if about a dozen people bought my book and liked it, I'd consider it a success. If it didn't sell well, I'd put it on my blog site for free and see if it got read that way. In the end, I'd like it to be read.  I'm a story-teller, and want my story told! Nothing wrong with friends and family!

Another thing to note about me is that I've long been an entrepreneur, and I'm not afraid to take chances, and do things myself. I've published iOS and Android apps, written (back in the day) 100% pure Java programs, and generally done things that others said were impossible.  I'm somewhat intentionally too ignorant to know that I can't do something, so I go ahead and do it.  The impossible sometimes dissolves when you do that. Once in a blue moon it doesn't.  As a tech entrepreneur, you cannot be afraid of failure, or you'll never succeed, because generally, anything you do is risky.

My previous colleagues would come up with something that we wanted to do, and they'd laugh, because I'd start out saying "That's not going to work because..." and I'd list a bunch of obstacles.  Somewhere in the next 48 hours I'd come back and say "I've figured out how to do it..." and often I'd have a working prototype!

So, in short, I figured that self publishing was for me.

Self publishing is a spectrum. At one end are companies like Friesen Press, who for a fee will help you create your book.  They want about $2,500.00 to do a serious engagement. They'll engage for small bits but will push you for that moderate package.  I suspect it's the one that they've had the most success at, so I'm not faulting them, but my research told me that the average self-published book made $500.00, so the math didn't work.

At the other end is do-it-all-yourself.  Sounds scary, but I'm a bit of a nut, so I decided to go for broke.  I love to try new things, and this sounded like a great opportunity to learn something new.


I made it a project!

I decided last year that I wanted to take a Christmas story that I was working on, and get it out by the next Christmas (this Christmas, 2017).

Then I started proofing it. For reasons too numerous to get into, I was unable to find a proofreader so I did my own proofreading. You're not supposed to, but I did. My English skills are quite good and once you tell Word that you are a Canadian, spell checker liked my Canadian spelling and supported it quite nicely.  I took awkward sections and reworked them until they didn't feel awkward.  I looked at dialog and reworked it.  It kept feeling better.

Now, I'm a perfectionist, but somewhere you have to draw the line and say "That's good enough!"

I had a deadline for myself. By mid-October I needed to start working with Amazon to get the eBook formatted, so that by the beginning of November, the book would be available in time for the Christmas season.  I will admit that I kept proofing it as I went along. I read it about 10 times in the Kindle Previewer, and kept finding little things I wanted to fix, so I'd make changes, upload them to Amazon, download the .mobi version and load it back into the previewer.

I signed up as a Canadian publisher with the Canadian government and got a range of ISBN numbers, for free.  I used one for my eBook and one for my paperback.

I discovered some beta programs that Amazon was running and signed up for a KDP account.

I gave in and spent some money on getting iStockPhoto credits so I could buy royalty-free art for my cover page from them.  So I'm out about $30.00 but I can buy a few more pictures with the credits. 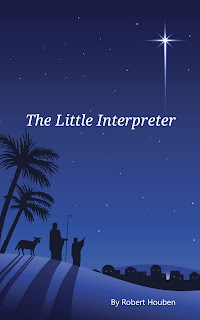 In the middle of my cub scout volunteering and planning, my Bible Study group starting up for the fall, a health problem that had Loretta call 911 for me, and intense efforts at work, I managed to do all of this, and plan out a marketing campaign that includes a bunch of social media.  I also created my Amazon KDP account, formatted and uploaded both an eBook and paperback version, setup payment mechanisms, configured an author blog and set up my AuthorCentral site.  Pretty crazy stuff, but I've done all this and more for software, in the past, so I don't find it that daunting.  Try publishing an iOS app someday! This was easy, by comparison!

And I've actually had fun doing it!

Well, on Saturday October 28, 2017, I posted both my eBook and my paperback.  They told me it could take up to 72 hours to be live, but the next morning the paperback was available, and the eBook was ready for pre-order for the Nov 4, 2017 release date!


The eBook can be pre-ordered here until Nov 4, at which time you can download it immediately.

The paperback version can be ordered here.  If you order the paperback, you can download the eBook for free.

I also created a playlist of my Christmas songs on my SoundCloud account that fit the story and named it after the book.  To hear these songs, click the play button below and adjust your volume:

These songs were all done on my Mac Mini using GarageBand. I had a blast recording them! All instruments and vocals are me! No

So, there, in a nutshell, is my latest mad venture!  Go big or go home!

I'll be posting a few excerpts from the book that stand alone on my writers blog site located here:
https://sototallyfiction.blogspot.ca