This Christmas season Loretta and I got to do something that we've always enjoyed doing and that's to see a lot of concerts and plays. It has been a very busy time for us.

The first one we attended was Geoffrey Castles Christmas at the Kirkland Performance Center in Kirkland, WA (part of metro Seattle area). Geoffrey Castle plays a six-string electric violin, and has created a Christmas CD made up of songs that predate the commercialization of Christmas. His performance completely exceeded our expectations and set the bar high for everything we saw since then. If you ever get a chance to hear him, do it!

The concert was on Friday Dec 3rd and we returned to Vancouver on the 4th. Then came Sunday, Dec 5th.

First, in the morning, Willingdon Church's children put on an exceptional play, named The Christmas Miracle of Jonathan Toovey. The boy playing the lead part was one of the cubs in my pack last year.

Then, in the afternoon, we had a potluck with our small group.

Finally, in the evening I led a carol sing at a rest home that I go to every month. The cub pack that I'm a leader with provided the singers for this occasion, and we had a great time with our small group of boys putting on a great, impromptu show, complete with rudolph noses and santa hats! These were the boy's own contributions. It was not planned that way by me!

That was just one weekend!

The following weekend was Burnaby Area's Cub Camp called Camp Icicle, so I was a little tied up for that, but the following week, on Thurs the 16th, we attended Willingdon's adult Christmas production in the evening. This is always an amazing production, rivalling many professional plays. This one was called "The Christmas Party", with the script written (as is often the case) by our Children's Ministries Team Leader(he's quite the talented character.)

Then on Fri the 17th, we headed down the the Vancouver Waterfront Fairmont Hotel. Loretta had got in on a Groupon offer of a half-price stay with breakfast for two included. This was a fantastic offer. We arrived in the hotel room to find the sun streaming in the window and a fantastic view of downtown, Stanley Park and Cole Harbour, in glorious, streaming sunshine! 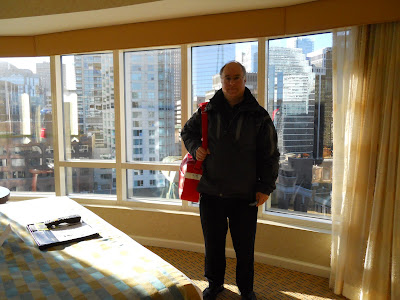 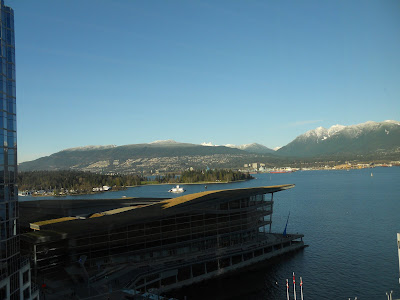 We moved on to the German market where we found our son Matthew's booth (sponsored by Dusa's Cheese Shop of Granville Island) and we had Swiss Raclette Cheese. 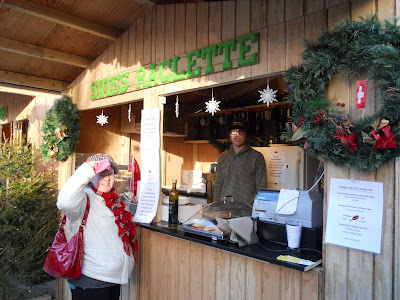 This is the Raclette Cheese. Delicious! 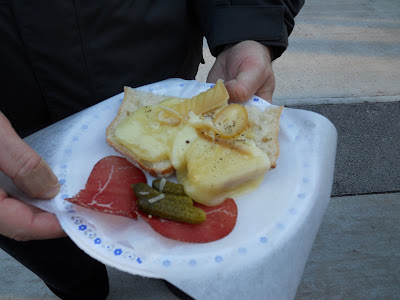 Then we returned and had a small supper before getting our things. Before heading for our show, we stopped by a ballroom in the same hotel where, coincidentally, Loretta's sister and her husband were having their office Christmas party. Our 16-year-old niece, Ashley was playing piano for the party. After enjoying a few minutes of her playing we headed off for our next venue.

We took skytrain and walked a short way, to get to the Goh Ballet's production of the Nutcracker. I had never seen the Nutcracker in person (on TV once or twice) so I was looking forward to this. It was an delightful production, and Loretta and I just loved it. After watching the children and older dancers perform, we had to conclude that the future of performing arts in this city is in excellent hands!

This last weekend was our Christmas present to each other. We have no other concerts planned at this time. That's how we like to spend our time around Christmas!
Posted by Unknown at 5:00 PM